To: The Membership and Interested Parties
From: Pat Nolan, Charter Member of The New Black Bart Poetry Society
Subject: The Poetry of Philip Whalen 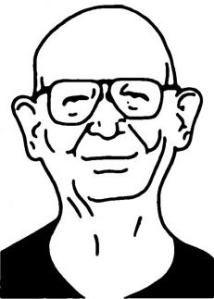 Philip Whalen (from an illustration by Chris Lods)

Philip Whalen (affectionately known as “PW” to some) is American Poetry’s best-kept secret. I first learned of Whalen and his poetry in the mid-sixties. I had read a selection of his work in Don Allen’s anthology and later owned copies of his early books, Like I Say from Corinth (1960), and the beautiful letterpress edition of Memoirs Of An Interglacial Age by Dave Hazelwood of Auerhahn Press (1960). These were poetry selections that back then I was still trying to make up my mind about. Admittedly, I didn’t get it all. It took the great letterpress printer, Clifford Burke, to introduce me to the voices and sotto subtleties of Whalen’s poetry. He was also the one who taught me how to listen to Thelonious Monk — I’ve been an avid admirer of them both ever since. The poet and teacher Keith Kumasen Abbott gifted me a copy of On Bear’s Head for my birthday when it was first published in 1970 – 400 pages crammed full of poetry and doodles for under $4 (in paper). I read it straight through like a novel. And when I was done, I knew something about modern poetry. But even more, my suspicions confirmed, I understood that here was a genuinely great American poet. When Whalen returned from Japan in the early 70’s, I attended a packed reading at Panjandrum Press on Sanchez Street in SF. That evening I heard the nuances of voice, the subtleties of tone, the flashes of humor, and the joys of improvisation from the source. Whalen was Thelonious Monk to Kerouac’s Charlie Parker.

Needless to say, I was totally intimidated by his genius. He had undercut all my preconceptions about poetry. And I wasn’t the only one in awe of his accomplishments. In subsequent correspondence with friends and poets alike, the myth of PW took shape: there were PW sightings, PW book rumors, PW anecdotes, PW apocrypha. . .anything having to do with PW was eagerly passed on in a kind of endless PW chain letter in the PW underground that has spanned these many years, and which I expect will continue as more and more readers get a fix on what a unique American poetry he has fashioned.

I eventually introduced myself to him, and paid a visit when he first moved into the SF Zen Center on Page. For the most part, busy with my own drama, I kept my distance and contented myself with attending his readings whenever I could. I got in the habit of bringing my well-worn copy of On Bear’s Head with me, and if the opportunity presented itself, I would have him sign it. Again. It was done in the spirit of a student having a professor sign off on a course of study for which, in this case, On Bear’s Head was the text.

One of the keys to understanding Whalen’s poetry is contained in the preface to Every Day (1964) as his description of what his poems are and what they do.

A continuous fabric (nerve movie?) exactly as wide as these lines – “continuous” within a certain time-limit, say a few hours of total attention and pleasure: to move smoothly past the reader’s eyes, across his brain: the moving sheet has shaped holes in it which trip the synapse finger-levers of reader’s brain causing great sections of his nervous system – distant galaxies hitherto unsuspected (now added into International Galactic Catalog) – to LIGHT UP. Bring out new masses, maps old happy memory.

Elsewhere (Since You Asked Me, 1959), Whalen likens his poetry to “a picture or a graph of a mind moving, which is a world body being here and now which is history. . . and you.” Reading Whalen’s poetry is to partake of a continuous stream of consciousness monologue/dialogue dream nerve movie echoing Heraclitus in that the poem, as framed sentience, is a shape shifting undulation which one can step in and out of in the process of being.

Mention Philip Whalen’s name in the company of contemporary writers and you’re almost certain to get a look of incomprehension. At best you’ll hear the same old tired assumptions tying him to the Beats and as one of the minor Beat poets. True, there is an association, more of a close friendship with the Beat writers identified as Ginsberg and Kerouac. That friendship did not extend to stylistic matters even though they were all major innovators in their day. For Kerouac certainly, Whalen and Gary Snyder were rough specimens of the Pacific, men of common sense, free of the inbred assumptions of the Atlantic shore, with an intrinsic connection to the natural world. Their DIY practicality was an intriguing aspect of these literate men, and their interest in Asian literatures and religions was something they held in common. That Whalen is lumped in with the Beats is an unfortunate categorization. As far as labels go, Pacific Rim seems more appropriate and under that rubric would include Snyder and Lew Welch, also West Coast born, and that radical transplant who found a congenial climate on the left coast, Kenneth Rexroth. Whalen himself is unique in his artistic liberalism and the gruff bluster of his ironic quotidian sentiment.

Gary Snyder, in the Forward to The Collected Poems of Philip Whalen (2007), says something about Whalen that should be the organizing principle for these musings. In characterizing Whalen, he says that Philip was always reading, always writing, and always itching to get his hands on a keyboard, begged or borrowed, to play a little music. That sounds like the portrait of a maverick with a shapely mind

As an aside, for those who are not fortunate enough to own a copy of On Bear’s Head, the previously most definitive selection of Whalen’s work, The Collected will serve as the main reference point, and for a number of reasons. One is the aforementioned summation by Snyder. The poems of course, all of them (for the most part) as it takes close to 900 pages to contain them, in running and chronological order. The several appendices wisely provided by the editor, Michael Rothenberg, one of which is Appendix C, Essays and Prefaces by Philip Whalen, and of special interest for insight into his working method is the contribution to Don Allen’s follow up to The New American Poetry anthology, The Poetics of The New American Poetry. Leslie Scalapino’s troublesomely odd introductory essay requires an assessment that is perhaps beyond the scope of these notes. Is it meant to act as Fudo, the guardian, to ward off the uninitiated with obfuscation? My advice: fear not, save the intro for later, and dive into the poems.

The picture that should emerge of Whalen as a poet is that of an artistically polymorphous polymath whose wide range of interests included music, art, poetry and prose, history, religion, and culture. By his own admission, he was a curious adolescent given to reading as a source of knowledge. An interest in magic, the conventional Western practice of power over others, led him to read Madame Blavatsky. The Theosophical texts led him to Vedantist literature and the unconventional practice of power or control over one’s material desires. From that stemmed an interest in Asian literature in general, and Buddhism in particular. Whalen as a voracious reader ranged far and wide for his material. That he was an American poet writing in English meant that he was certainly more than passing familiar with the classical Western canon as well as the modern writers and contemporaries whose influence was immediate and visceral. Yeats, Gertrude Stein, Pound, Blake, Robert Graves, Whitman and Williams all staked a claim to his attention as did the translations of the ancient Chinese poets by Arthur Waley and the collections of Japanese haiku presented by R.H. Blyth. But to what purpose was his auto-didacticism? Whalen captures the reason in the prose section at the end of Minor Moralia (1962).

Quite often when I feel that I have an idea, a notion or an insight, I am actually understanding something I once read or heard – or I find that I’m now able to express and idea of Plato or of Whitehead in my own vocabulary, in words which correspond with exact feelings, with personal experience – I suddenly see something, comprehend.

In an earlier statement on esthetics he writes “. . .I am not trying to inherit his mantle [Samuel Johnson’s] as literary dictator but only the title Doctor, i.e., teacher – who is constantly studying.” He goes on to say, in probable defense of his outsider status, “I do not put down the academy but have assumed its function in my own person, and in the strict sense of the word – academy: a walking grove of trees.” But he also cautions that the function of this knowledge in his poems “cannot and will not solve any problems or answer any questions.” (Since you Asked Me, 1959)

Whalen dedicated himself to the ideal of the classical scholar, a learned man of discerning erudition steeped in the distinct cultures of Europe and Asia. In part he followed Pound’s scholastic example, but he also heeded Huxley’s concern that the poet must endeavor to know everything about every thing. And undoubtedly following Huxley’s lead, he also interested himself in altered states of consciousness. An unpublished letter regarding his peyote experience proves the utility of his wide ranging knowledge. He had the comprehension, and reference, and intelligence to understand what was happening to him, to name the demons and apparitions and relate them to a specific hierarchy of phenomena encompassed in ancient beliefs. Philip Whalen wasn’t a tripper, he was a traveler in a way that shamans are, and bodhisattvas, which, in my opinion, is another manifestation of the shaman role now known as poet.

Certain teachings are whispered into the right ear,
others are murmured into the left; but the
most sacred and arcane of all must be blown into
the crown of the head, down through the sutures
of the skull bone. When the recipient of this
wisdom is able to convey it to another human being,
to a horse, to an ant, a spider, an owl, a goldfish
and a high cliff by words, gestures, actions
which probably affect the lives of any
such beings I’ll be happy to call him a
wise man, saint, successful poet, living man, etc.