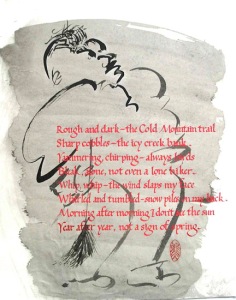 In December 1957 Jack Kerouac typed this letter to Gary Snyder in Japan, on the back of a letter from Allen Ginsberg.  The letter reprises what Kerouac did that summer to go up to the Lookout in Washington.  Snyder was on board the ship Sappa Creek since August-April 1957 and he only received the letter when he returned to Japan and then left for the United States to live in Marin County in California.

Before this date, Snyder had the idea for his long poem, Mountains and Rivers Without End, but had only made notes in his journals for the poem.  He was writing a long poem, Myths and Texts, where he had collaged together many smaller poems and fragments into thematic groups.  This was finished in 1958, published in 1960. That poem combined many types of language:  anthropological, poetic, colloquial, scientific, sociological, philosophical, political, religious, Buddhist and Taoist texts, naturalist memoirs, etc.  But its overall tone and rhythms were mostly formal in Myths and Texts.  There were few loose colloquial and/or dialogue or descriptions included.

Upon his return to Japan to study Zen he wrote partial drafts of “Night Highway Ninety-Nine” by 1960.  He wrote “it’s too intellectual still, . . . & then sort of forgetting it a long time beginning to fairly spontaneously write into it.”  But when he wrote “Bubbs Creek Haircut” in May 1960 after a return to Japan and regarded it as his breakthrough poem for the larger work, showing his desire “for the rhythms of impromptu jazz, the ‘spontaneous prose’ that Kerouac was writing.” (see Anthony Hunt, Genesis, Structure, and Meaning in Gary Snyder’s Mountains an Rivers Without End, UN Press, 2004, p. 15).

Kerouac’s letter to Snyder scattered some brilliant haikus throughout his crammed version of hitchhiking up to Skagit Valley and its adventures.  In his prose the haikus were written as one line of verse with / separating the line breaks.   I have taken the liberty of rearranging his letter to let the haiku’s each have their own space.  Even though Snyder’s breakthrough in “Night Highway Ninety-Nine” and “Bubbs Creek Haircut” came in 1960, Kerouac’s letter had shown the way about how to write both the prose and poetry and what to include.

Left Mill Valley June 18, hitched to Marblemount . . had salami, sharp cheese, rye krisp  dates and peanuts for trip…. washed my feet in Russian River . .. big truckdriver talked all night, bought me meal…etc…  at Crescent City I started walking on wrong side of road on purpose to be like Chinese saint wandering into void… . got rides anyway, over the Siskyous… .slept in a mountainside full of poison oak avoiding the poison oak….Grants Pass,  and on up, sweet sleep in field outside Eugene, red nightfall

Got into Seattle via Bremerton, on the ferry in the rain I stood before the skipper’s bridge swiggling found-bottle of Vodka, PORT OF SEATTLE big red letters, immediately old strange totem pole Alaskan Way and 1910 steam switchpot made me love Seattle, got skid row room 15 foot ceiling and read VajChePraPar

then 99 to Bremerton and. the first sight of the vast mountains…
buy belt, socks, shirt, bandana hankies…: Then up past Everett, ride from big lumberman who stays “Skagit valley land looks like butterfat”– . . .Quick short rides up the Skagit Valley, from a fast talking logger-prospector and his mother, thru Sedro -Wooley to Hamilton, he’s going uranium hunting—from a Min n Bill couple—to a grocery store in Sauk—from a sweet young kid logger like kids in back wood of Dracut Mass with a naïve believing side look—and from a mad drunk fast swerving dark guitar to dusty flying stop at Ranger Station. .  .Long talks spinning wheel for kids in bunkhouse….”The only way to achieve a perfect vacuum,” says I to them as they argue senselessly about scientifics, “is to stop thinking”—“Because mind is matter and matter is mind”—

And then I go out, buy wine bottle in Marb, sit on bank of rushing cool green Skagit, afternoon and later by moonlight, along writing hokkus

Notebook say:  “Found letter from Gary Snyder on cookhouse table, telling me to hike to where Dave just went today and asked me to come too—2 Hanshan poems making me more’n  ever want to find me ‘a mountain to be kept forever’—
“….etc.etc. and fire school and Blacky Burns who asked about you, what is, kept talking about you, “Dat dere Gary wherever he goes he’ll always have fun….” And mad about the F.B.I. and whata a great man he is indeed, we sat quietly eating lunch together in front of truck while kids and old Fred Berry ate in other truck . . . .Blacky lit fire to be put out, wanted me to be takin charge but I said “Ah Blacky I’m jess an old bum, let these forestry kids take over”—I got good mark(s) in fire fightin . . .in baseball game which we lost wasn’t my fault because I got three times at bat, scored two runs, hit three doubles …..made friend with Tommy Buller during game, we’d almost had fight just before because he said I wasn’t bein paid to think and I said “I am”— Blacky is a sweet old Pa….Finally Andy the Packer come to get me and we go to store and get my groceries then to Ross Barge for a night or two, where I dig latrines on shore, then up the Lake on the bargepull boat in rain and the mule slash (sic) onshore and we start up (with Ghohlke) in sleet, rain, and snow, higher, higher, up Desolation, sweet Desolation, where I learned all and I’ll write you a huge long letter from Europe  (no, right next 2 week from my Maw’s house in south) describing it all ….

.have no time now, just adding p.s. to Allen’s letter, I haven’t written to you for the odd Mexico reasons of no post offices and stamp facilities for overseas etc. and couldn’t get up in time …….but I think of you all the time….more than you know—— On Desolation, well I’ll tell you later, it’s a long beautiful tale quietude….Meanwhile I have been writing furious, for this  year for instance I have three new novels and new perms (poems??) and now all of a sudden 2 contracts with publishers in NY here this very day it’s taking place…..have great new way of transliterating Diamond Sutra that will at last spread the diamond sutra in the west and maybe even in the east, all Sanskrit terms out of it, but translated into simple English, I cry when I read it sometimes and I read it every day……that too I’ll send you later….meanwhile be you the Gary Snyder of my dreams…be you sad deep Gary, sad funny crazy Gary, and be bejesus god we’ll go climb mountains again soon              Jack

Jack’s notebook dialogue entries serve to point out that samples job talk and travel preparations sets up a narrative later used as plot points for leaving or arriving at Desolation.  Anthony Hunt cites that a Snyder shirt pocket journal dated 4:October: 57 had “Snyder’s first inklings of what would become “Night Highway 99” [Hunt: p. 71] the first substantial section of Mountain And Rivers.

Professor emeritus Keith Kumasen Abbott, poet and calligrapher, is the author Downstream from Trout Fishing In America, A Memoir of Richard Brautigan as well as four novels, and short story and poetry collections.    His calligraphic art has appeared in numerous art shows from Shanghai to San Antonio, and in a recent issue of Mark Young’s Otolith. The memoir of his Zen teacher, “Cloud Phoenix, A Memoir of Kobun Chino Otogawa Roshi” is online at www.keithabbottwriter.com.

New to the Society’s Shelves