Plagiarism and the Poetry of Ulalume González de León

Plagiarism and the Poetry of Ulalume González de León

Ulalume González de León, winner of the prestigious Villaurrutia Award and the subject of numerous literary studies, whom Octavio Paz called “the greatest Mexicana poet since Sister Juana Inez de la Cruz,” wrote some of Mexico’s most original poetry. Yet, she titled her three books of poems Plagio, Plagio II, and Plagios. In English: Plagiarism, Plagiarism II, and Plagiarisms. Why did she call her poems plagiarisms?

Professor of Spanish/Latin American Studies at the University of Florida, Efraín Barradas, in the Spanish language online magazine 80 Grados, says that González de León created, among other kinds of poems, “readymades,” in which “the eye and hands of the artist take from reality something already existing and, with a minimum of changes, convert it into something else, and in doing so create a work of art.”

The term readymade “was first used by French artist Marcel Duchamp to describe the works of art he made from manufactured objects. It has since often been applied more generally to artworks by other artists made in this way.

Duchamp’s most famous readymade, “Fontaine” (“Fountain”), is a porcelain urinal, turned ninety degrees and “signed” by the artist. (The signature, “R. Mutt,” is a play on the name of the urinal’s manufacturer, J. L. Mott Ironworks.) Picasso as well created a readymade, “Cabeza de toro” (“Bull’s Head”), by joining together the handlebars and leather seat of a bicycle.

Professor Barradas further states that González de León, in her poem, “Dos adivinanzas,” creates a verbal readymade by transforming a well-known children’s riddle into something new. She does this by giving the riddle an unexpected solution.

(Solution: the top and it string—in my infancy)

(Solution: the emerging poem and the mind—1974)

Such art, Barradas says, “makes us think about the nature of the artistic and the essence of the aesthetic.” What González de León tells us with this poem is that “poetry is present everywhere; only the eye and the ear of the poet are needed to find it.” What art critic Eric Gibson said about Picasso’s “Bull’s Head” could equally be said about González de León’s poem:  “[B]oth childlike and highly sophisticated in its simplicity, it stands as an assertion of the transforming power of the human imagination…”

Because readymades require the prior existence of things in the world—urinals and fountains, bicycles and bulls, children’s riddles and the making of poetry—their creation is never, Barradas says, “absolute creation, creation from scratch.” They are “something new and old at the same time.”

In her introduction to Plagios, González de León writes: “I choose to say even that which was said, which is different now because this accumulation of convergent data, whose point of intersection I meet, transforms it.” In other words, there is in her poetry a coming-together of past literature and history, of science, math, advertising slogans, jokes and riddles—an accumulation—which is changed into something new as it passes through the poet, or as she says in an interview with Elena Poniatowska in La Jordana Semanal , the past is transformed as it passes through “each unrepeatable person.”

González de León goes so far as to say: “[E]verything is plagiarism. Everything has already been said.” This, of course, is not new. You can find it in Ecclesiastes: “There is nothing new under the sun.” Goethe said “the most original modern authors are not so because they advance what is new,” but because they know how to say something “as if it had never been said before.” Y.B. Yeats wrote in his “A General Introduction for My Work,” “Talk to me of originality and I will turn on you with rage. I am a crowd, I am a lonely man, I am nothing. Ancient salt is best packing.”

Writers and artists have been telling us for centuries that new works of art draw deeply from works that precede them, whether indirectly or directly. As Eliot said, “Immature poets imitate; mature poets steal.” Though he was quick to add that “the good poet welds his theft into a whole of feeling which is unique, utterly different from that from which it was torn.” This is the sort of plagiarism González de León has in mind, the kind of “theft” that leads to something “utterly different.”

In her interview with Poniatowska, González de León discusses another “readymade” in her collection, “Noticia” (“News”).

González de León found the text of this poem, a footnote to a photo, in The Insects, published by Time/Life. She tells Poniatowska that she “rescued” the text, not only for its lovely rhythms, its consonances and rhymes, but its import. González de León asks, “[W]here was the wonder – news – and suspense – the hanging – of the metamorphosis?” By introducing the text with the title, “News,” she opens the readers’ eyes to what they might have missed by looking only at the text and photo.

What may also have been at work, though she doesn’t mention this in the interview, are the poem’s resonances with two widely known poems by Willian Carlos Williams. (González de León was familiar with Williams’ work and spoke highly of his analysis of e e cummings, whose poetry she translated. (John King, The Role of Mexico’s Plural in Latin American Literary and Political Culture, 2007):

It is difficult
to get the news from poems
yet men die miserably every day
for lack
of what is found there.

so much depends
upon

beside the white
chickens

González de León finds “news” in a footnote in a book of popular science. By drawing our attention to its language, not only its music but its meanings, she lets us see (and hear and feel) its resonances, its intersections. The word “pende” appears in the Spanish original. But pender (to hang) is closely associated with depender (to depend), just as in English the word pendant (and pending, and pendulum) is closely related to depend.  And while, in the WCW poem, so much depends on an image, in the González de León poem, so much depends on words. She tells Poniatowska, “I think that writing is giving words their maximum load of meaning…” 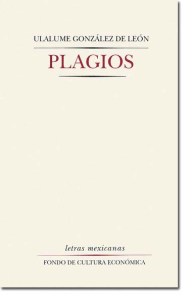 In the epilogue to Plagios, González de León compares plagiarism to eating. The poet takes in the words of others as one takes in food, digests them, then uses them to build “our body, which is to say, other language, which is to say, other poetry.” Readers of modern poetry might think of other “plagiaristic” poetic processes, like the one Eliot used to create “The Waste Land,” whose sources include Homer, Sophocles, Virgil, Shakespeare, the Bible—to name only a few. Or Pound’s Cantos, with their wide-ranging literary, cultural and historical references, including the incorporation of texts in their original languages, alphabets and logograms.

But, unlike the Cantos, which Pound referred to as “grab-bags,” González de León’s plagiarisms are, as Octavio Paz tells us in his introduction to Plagios, “a geometry… a precise mechanism of correspondences and oppositions… [F]or her, language is not an ocean but an architecture of lines and transparencies…” Transparencies like readymades that are both old and new at the same time—the same and yet entirely different.

John Johnson’s poems have appeared most recently in frankmatter, The Inflectionist Review, Sky Island Journal and The Turnip Truck(s). Currently he is co-translating the poetry of Ulalume González de León, for which he and his co-translators, Terry Ehret and Nancy Morales, have received a NEA Translation grant. Their translations, together with the originals, have appeared in Triggerfish, Critical Review, Clade Song, The Ofi Press Magazine, Chaparral, and  Poetry Flash.  They plan to translate all of the poems in Plagios, and publish them, together with the originals, in three separate volumes.