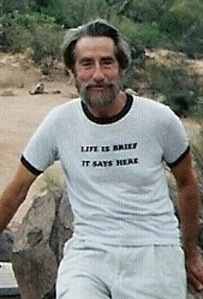 Life Is Brief It Says Here

David Bromige was here.  Although, truth be told, he wasn’t from here.  Like many coastal Northern Californians, he was from elsewhere: England, then Canada, and finally, rustication north of the Bay Area.  What drew him here, where there is only here, was a peaceful place to engage in his bottomless curiosity and to up the ante on the knowledgeable.  The long though not so winding road he took to get here was more of a dogleg, a straight shot from England to the prairies of Saskatchewan, and then hop, skip, jump to the university campus in Vancouver where he impressed the locals with his proper brilliance and his conservatism.  That would soon change once he got wind of the tempest surrounding the New American poetry, especially that whirling around Charles Olson and Robert Duncan.  That led him to matriculate, as only Bromige could, down to the Bay Area where he fell into the good graces of the aforementioned Duncan and came to the attention of a coterie of proto-Language poets.  Eventually he secured a teaching position at an institute of higher learning north of the Bay in Sonoma County. That’s where I met David, in the early 70’s, while attending Sonoma State University (then a mere State college) on the GI Bill.  My friend, the poet Keith Kumasen Abbott, recommended that I look him up because David Bromige was “one of us.” I took that to mean of the more experimental non-academic wing of American poetry.

June 4th marked the tenth anniversary of David’s passing, or as Gerald Edelman would say, his “personal entropy.”  What I remember most of my early acquaintance with him was his affability.  He helped me with or facilitated many of my literary projects. When Andrei Codrescu and I were publishing a co-edited double issue of my poetry mag, The End Over End, we were allowed access to the English Dept’s mimeograph machine after hours to run it off, thanks to David’s beneficence. Another time in the early 80’s, long after I had severed my connection with that institution of dubious learning, David arranged for the audio visual department to make VHS copies of the professional videos of the First Black Bart Poetry Society Benefit held at the On Broadway in San Francisco.  It was also through David’s efforts, unbeknownst to me, that I was included in a selection of California poets published in the Italian literary magazine, Carta Segreta. When he sent me a contributor’s copy of the magazine in which my poem appeared in Italian, he included a note that said “I had to fight like a tiger to get you in here.”  (I don’t doubt it.)  He once generously paid me, as things were often tight between paydays, to talk to one of his lower division classes about the Cubist and Surrealist poets, knowing my interest in them and my translations of their work.  I remember somehow the discussion got around to Jack Kerouac.  The blank looks on the student faces at the mention of the name led me to inquire who, if anyone, had read his work.  No one stirred.  I looked over at David.  “Bob Dylan?” I tried.  Nothing.  We were staring out across a generation gap though it felt more like “the void.”

At one point in the mid eighties the imperatives of family life took precedence in the form of regular employment and the attendant paucity of personal time.  David and I experienced mutual personal encounters on occasion, always promising to make time for more, though too often that time was invariably taken up with something else.  There were a few readings and dinner parties but the fact was our young children demanded most if not all of our attention.  A decade or so passed in that fashion, and it wasn’t until I had retired from my job as a lowly civil servant after the turn of the century that I was drawn closer to David’s now quite wobbly orbit.  I learned through a mutual friend that David had heart troubles, a stroke and bypass, and was wheelchair bound.  Soon afterwards, attending a reading of his at a local bookstore, I reconnected with him.  I now had more time to renew and cultivate our mutual interest in the art of poetry, although we didn’t talk so much about poetry as we did of poets so maybe our mutual interest was actually the art of gossip.  There also were plenty of friends who had stepped up to help with David’s mobility issues and ease the burden on his family.  I was only one of them.  David at the time was working on publishing projects and collaborations with the poet Richard Denner.  A memoir was being cobbled together with the help of Petaluma poet Bill Vartnaw.  David continued to attend and to give poetry readings.  He arranged for me to read with him at a local library.  I chauffeured him to a few of his gigs.  One was in Petaluma in a quasi nightclub café that I remember as resembling the lounge in a bordello.  We were seated waiting for the event to commence when in walked the poet Gene Ruggles and from all appearances he’d fallen off the wagon again.  He spotted David right away and came over to give him a big bear hug while exclaiming in a very loud and 100 proof voice, “I love you, man!”  I remember quite well David’s mortified expression as his frail body was crushed by the affection of this lumbering specimen. Subsequently, whenever there was an awkward lull in our conversation, one of us, to lighten the mood, would say “I love you, man.” Over time, it stopped being so much of a joke. 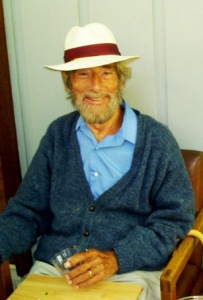 In the summer of 2005 David joined Andrei Codrescu, Joanne Kyger, Michael Rothenberg, Gloria Frym, Bruce Cheney, Gail King, and I for a reading in memory of the poet Jeffrey Miller at the Pegasus Theater in Monte Rio.  Over two hundred people were in attendance, and David, in his panama hat, was by far the audience favorite. Most of the time though I would just visit the little house on High St in Sebastopol, a street name David thought quite appropriate, to sit at the kitchen table and entertain him with wild imaginings, exaggerated progress reports on various projects, extemporized excerpts from my satire on poets, and pass on various crumbs of gossip from the greater world of poetry.  Or we would hang out in his sunny front yard bordered by a low white picket fence where the entire neighborhood could walk by and catch a glimpse of the eccentric poet in his underwear and his oddball long haired friend.  I’d say, “David, you know you’re essentially sitting out in public in your briefs.”  “They’re shorts!” he’d retort.

Looking back, I realize that I was in denial when David gave himself a birthday party on October 18th, 2008, and that it was actually a deathday party to which he’d invited his friends to say goodbye. A celebration of life, nonetheless.  On hand was a gathering of the usual poetry suspects including Joanne Kyger, Donald Guravich, and Barry Gifford, Kit Robinson, Jerry Rosen, and Steven Lavoie, Terry Ehret, Stephen Ratcliffe and his students from Mills College among many others lost to the mist of time and foggy memory. The little house on High Street spilled over into the yard and sidewalk with people.  It was on this day that Kathleen Frasier, also in attendance, announced the forthcoming publication of David’s collected poems, a joyful occasion tinged by the grave realization that it would most likely be a posthumous edition.. 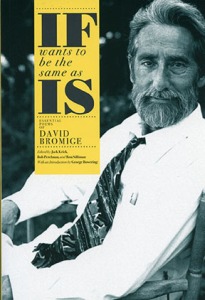 And what a collection it is! Nearly ten years after that announcement, If Wants To Be The Same As Is, David Bromige’s collected poems, all 600 pages of it, was published by New Star (Vancouver, 2018).  There was only one problem.  It wasn’t really a “collected” poems, more of a selected collected.  An entire collection of poems would have entailed at least one similar sized volume to give an accurate idea of David’s prodigious output and publication history.  No matter, the selected collection lends a unique perspective in highlighting forty plus years of literary achievement.  It often takes distance and overview to come to terms with the enormity of creative brilliance, as is the case with David Bromige and his essential poems.  Following the chronology of his three dozen books, the progression of his adaptation and appreciation of various contemporary literary styles, from minimalism to conceptualism and beyond, and what he does with them, is a truly extraordinary.  Ultimately, his peerless intelligence and wry wit found its realization in the sheer joy of composition, of setting the products of language down on the page. There is always some assumption of logical if not semantic progression, of resolution that will render the poem an artifact, done. His was a constant search for definition, any kind of definition, no matter how momentary.  David could appear aloof, seemingly adrift in a lexical paradise of his own making, but always with an innate sophistication, a haughty bemused filter through which his smoldering authentic genius was made known in his poetry.

A taxonomy of poets can be an amusing diversion, subject to the revisions of hindsight, of course. David’s classification would run something along the lines of “Post-Modern, Anglo-American, Pacific Rim, proto-Language School, Neo-Formalist, Irony Monger”. More precisely however, he was a giant among poetry pipsqueaks, pretenders, and poseurs.  Yes, Bromige was here, but it has yet to dawn on the many just how here he was.

(Read Pat Nolan’s review of If Wants To Be The Same As Is, The Essential Poems of David Bromige in Poetry Flash)