Meditation In A Big Cabin

MEDITATION IN A BIG CABIN 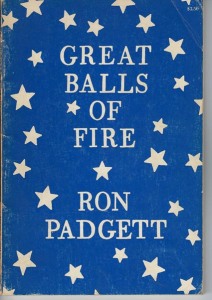 It has been fifty years since Ron Padgett’s Great Balls of Fire lit up the poetry sky. In 1969, Padgett’s publication by a mainstream publisher, Holt Rhinehart Winston, was a tremendous breakthrough for a non academic unaffiliated poet of the younger generation. Great Balls of Fire set a new standard and Padgett was the standard bearer, a position reinforced a year later with his co-editing of the groundbreaking Anthology of New York Poets. Along with Don Allen’s The New American Poetry, it functioned as a Get-Out-of-the-Poetry-Gulag-Free card.

For many poets coming into their own in the sixties and seventies, Padgett, as well as the poets associated with Lower East Side Manhattan of that time, represented a way out of the particular neo-romantic Beat/neo-classic New Critic conundrum. That this group of poets was in tune with modern-day culture in a way that paced the times was their most resonate appeal. By offering a breezy often frivolous post modern pop surrealism, they made it acceptable to write about the commerce of the everyday and to let that define their context.

Padgett’s foundational role in mapping this distinctive focus in American poetry has been acknowledged on numerous occasions. His strength is thanks to a poetry that places him as a contemporary signifier in American letters and with an acumen based on the trends of modernism begun over a century ago, an aesthetic thread that struggles to gain a hearing in a visually challenged Anglo biased literary environment. His association and collaboration with artists Joe Brainard, Trevor Winkfield, Jim Dine, and George Schneeman, among others, underlines how art can be a lens through which to view literature, poetry in particular. Even the titles of some of his earler books give significance to art and artists as exampled with In Advance Of A Broken Arm (Duchampian), Triangles In The Afternoon (Cubist), and How To Be Modern Art (Dada/Surrealist). Certainly his translations of Guilliaume Apollinaire, Blaise Cendrars, Raymond Roussel, and Valery Larabaud helped to reintroduce early 20th century French poets into the dialectic of contemporary American prosody.

In his own inimitable way Padgett also continues the work of William Carlos Williams, and, in some respects, E.E. Cummings, in the use of a laconic uninflected plainspoken language, one that hides beneath its surface the sly American wit of exaggeration and the conspiratorial wink. There has always been something of the corny, the shaggy dog in Padgett’s poetry. Sometimes his gentle almost imperceptible language displacements are effected by faux irony and open ended indeterminacy. The reader is not so much dazzled by the Wow! as arrested by the Wha?

Despite its zany off-the-wall unpredictability (or perhaps because of it), Padgett has made his unique brand of American poetry accessible to a wider range of sensibility with his perceptively personal pop slice of life takes. He speaks to a generation introduced to culture by newspaper comic strips, radio comedies, and early TV sitcoms. The symbolic use of comic strip art resonates with those of an age exposed to illustrated story telling. Brand names and cartoon characters found a place in poetry in part due to the collaborations of poets and artists.

Padgett’s truck with modern artists continues in his latest selection of poems from Coffee House Press  featuring a cover by Alex Katz. In the prose composition that makes up one of the three sections of Big Cabin, Padgett’s admits a familiar context.

“My penchant for comic book imagery comes partly from having immersed myself in comic books as a child, alone in my room but not really alone, since I was with my friends Daffy Duck, Little Lulu, Plastic Man, Sad Sack, and a host of others, all of whom lived in a world where order prevailed and the colors were bright.”

Add to the mix radio comedies and dramas that required the imagination to think in pictures but also providing a pool of idiomatic American speech, and the ubiquitous Saturday movie matinees for the anonymous and collective joy of onscreen antics whose repeated tropes were integrated into the short hand of language commonality. Each gave value to nostalgia (ubi sunt) as being significant in the development of a working aesthetic across a generation of peers.

In Big Cabin, Padgett limits his props to a cabin on a pond in isolate Vermont (sic), some rain drops, clouds, trees, a notebook, ink, and pen.

I give up
for today
but I’ll be back
tomorrow
with my pen
and paper and identity
that keeps an eye on things.

It is almost as if Dear Abby was a Zen master living in a cabin in Vermont studying to be Thoreau.

You’re here—
and if you relax
for a moment
your back
and other parts
will arrive
and you can be
together,
with yourself,
a little happiness.

“The Hook” exemplifies the meditative quality of exile from a larger commerce. It works as an appreciation of the moments between the momentous, the forgotten forgetful moments that are discarded like body ash, the faint particulates of being. Here the minimalist tendency, strict, often severe in its uncompromising individuality, narrates with a Dick and Jane diction, wry, sly, pop, unapologetic. 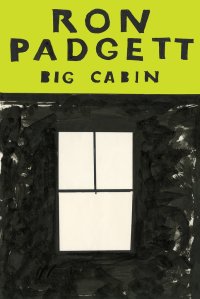 All it takes is a hook
even a small one
of any color
and you’re in. Today
it’s gray that grabs you
and won’t let go
and you don’t want it to.
It’s a tree.

“Haiku”, although technically not a haiku, accurately renders the philosophical underpinnings of Zen usually associated with the form as an aphoristic homily.

First, calm down.
Next, stay that way
for the rest of your life.

It could be stitched on cotton with colored thread and stuck in a frame. The sentiment, if it can be called that, is expressed as (not surprisingly) a Norman Rockwell trope, all American, guileless.

“Life Without You”, like an old Max Fleischer cartoon, uses a similar light-hearted, clever, unpredictable morphing from one image to another. Beginning, “I leap from the title to this first line as if over a stream” and ending on the next page with “They need a clown.” That would be Koko.

or How To Read A Ron Padgett Poem

“People vs. Leaves” returns, as do other poems in the selection, to a world weary undercurrent. The solitude and reflection of light off the pond casts longer shadows, exposes darker threads of looking back, defiant, with a frustration that imagines humanity with no more value than a pile of raked leaves, a morose dive that is suddenly upended with the ironic mock realization.

But if humanity disappears
who will read this poem?
Fuck

The persistence of irony plays out playfully as a poetic stance in Padgett’s poems. It is a reminder that what is on the page is literature (reading material), not a how-to guide for dummies on how to live their lives. Or prompt an epiphany. The spare quality of the poems function as sentient captions to self-evident illustrations of meditations on solitude, an assessment on those moments that don’t get assessed enough, if at all. Yet underlying the poems is a bemusement undermining expectations with the predictable deadpan humor of a Richard Wright or a Bob Newhart.

The poems in Big Cabin function as verbal illustrations utilizing a basic, low yield Joe Friday pokerfaced “just the facts, ma’am” vocabulary. The mundane immediacy is expressed sparingly and without pretense that it is anything but what is there. It is a kind of what-you-see-is-what-you-get poetry initiated long before that concept came into being. Now Padgett’s matter-of-fact poems are just that, a plain speak minimalism that in some cases belies common cultural sense of what a poem is or should be but at the same time

hits the nail square on the head with its discerning correctness. Deceptively simple, in fact, and silly as a Silly Symphony or a Looney Tune, Ron’s poems might even prompt a first time reader to react like Laura Linney in The Savages: “Is that it?!” Or to think, “That’s a poem? I could do that.” That may just be the point.

Big Cabin could lead the reader to think of it as the calm after the fireworks. That would be a mistake. Ron Padgett exercises his poetic license with the purity of his intent despite the tongue in cheek sparkle of his eyes. Among the many adjective used to describe Padgett’s poetry, the most telling is almost never used: subversive.

Submitted to the membership
by the Parole Officer
7/31/19