Rounding out Philip Whalen Month is a previously published succinct and insightful review of The Collected Poems of Philip Whalen by Keith Kumasen Abbott who has authored numerous essay and lectures on the American poet and Zen monk appearing in this blog: Nothing Is Forever. Rhythm-A-Ning.  Little Mag Art. A Diamond Wired For Sound. 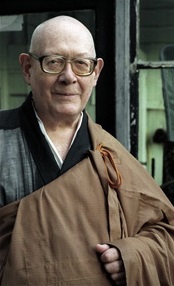 Zen Priest Philip Zenshin Ryufu Whalen lived so intensely that he often needed to share these experiences. He characterized his urge thusly: “My concern is to arrange immediate BREAKTHROUGH/into this heaven where we live/ as music.”  Toward his goal he wrote enough for his large Collected Poems to display the startling breadth of his interests and talents.

Typically, chronological collected poems are for scholars, and editor Michael Rothenberg has performed those duties splendidly, especially by the inclusion of Whalen’s revealing Prefaces and Essays about his poetic and contemplative practices. In Whalen’s works the scholarship possibilities prove rich—encompassing artists of the San Francisco Renaissance and the Beat Generation, the history of West Coast Zen Buddhism and Whalen’s uses of the American Song Book, jazz and avant-garde music.

Essentially a poet of celebration, Whalen sought out those contemporary artists who gave him their permission to illumine moments “for yr. own joy” as his friend Kerouac advised. This volume also illuminates Whalen’s constant engagements with past poetic and philosophical masters. As Gary Snyder notes in his Foreword, at Reed College Whalen went beyond “our official modernist mentors Yeats, Pound, Eliot, Williams and Stevens” to use “Pali Buddhist texts” to fashion “poetry out of the territory of those readings.”

Dry wit, abstract feminine rhymes, and the assonance of “or-tho-dox” with the unrhymed line’s last word “wrought” are reminiscent of Eliot’s “Burnt Norton”.

At the bus stop
I saw two crisp spiders
Each clamped onto his own slowly warming stones
Black stars in the unexpected sunlight.

The precision of the spiders’ placement in an urban landscape first, then the spiders morphing into a cosmological metaphor, also resembles a Williams’ trope.

From the mid-1950s on, the Zen tradition of living in each moment fully (and often humorously) remained his main resource for his breakthroughs. Whalen continuously monitored and revealed his ecstatic and darkest contemplations. Stylistically, his motto seemed to become “Why not?”  In his guise of an acerbic yet delighted hermit, Whalen composed his idiosyncratic comedies of Zen arrows and errors meeting in the mid-flight. From his Kyoto book-length poem Scenes of Life at The Capital:

At home, the vegetable supply
A Dutch still-life set on reversed lid of nabe
Half a red carrot half a giant radish half a head of hokusai
A completely monumental potato
China will sail across big Zen soup to me

They peer down through my ceiling
“Poor old man he’s too fat to live much longer.”

In “Friday Already Half-” a 1963 meditation on sunyata, aka the void, Whalen invents patterns very close to Zen philosopher Dogen’s remarkable paradoxical concatenations of negative logic, years before his essays became widely available in English. (In the early 1980s Whalen became a co-translator of Dogen with Kaz Tanahashi.)

The unthinkable is not a blank, not a non-entity
Not to be dismissed as imaginary, not death, not sleep

During his habitual deep doubts Whalen can be as bleak as Hakuin during that master’s most blunt and scathing self-assessments, pointing directly at our tangles of desire and impermanence.

.  . . I can’t say that being born is a chance
To learn, to love and to save each other from ourselves:
Live ignorance rots us worse than any grave.

You come to me for an answer? I
Invented it all. I
Am your tormentor, there no
Escape, no redress

You are powerless against me; You
Must suffer agonies until you know
You are suffering.

This embodies Whalen’s dramatic version of the essential Buddhist truth that all our thoughts have no self but thoughts maintain that illusion, thereby creating the roots of our suffering.

Technically, Whalen’s work sometimes resembles a funhouse mirror version of The Princeton Encyclopedia of Poetry & Poetics. Some commentators call his freewheeling poems either mobiles or collages; in either case, the most diverting verse techniques commingle. A giddy cartoon bubble caption may link with very complex poetry, as in “I Return To San Francisco”:

Such juxtapositions create a comic portrait of our forlorn narrator, one simpatico with Ginsberg’s desperate yet slapstick narrator in “America” and with Kerouac’s hapless yet eager amateur mountaineer in The Dharma Bums. All three authors shared an appreciation of Krazy Kat comics and their buoyant visual and verbal farces.

In the last stanza Whalen’s classical musical training, love of jazz and meticulous poetic ear produces improvisations on tetrameter rhythms with an evolving pattern of displaced accents, shifting meters and masculine and feminine rhymes. He expands from a condensed four-beat first line to an irregular iambic pentameter second line. In the third octameter line a caesura divides it into two four-beat lines—the first slightly variable iambic tetrameter, the last compressed and beautifully irregular.

Something has taken the bark away / the wood weathers orange & twisty

Of the Beat Generation writers, Kerouac, Amiri Baraka and Whalen display the most sustained skillful uses of jazz rhythms—i.e. condensed and expansive motifs and resolutions. All celebrated the heavenly bliss and energy that jazz aroused.

Truly spontaneous art arises from long hard practice, and for Whalen Western calligraphy was a daily routine. His works were first written in his Italic hand. Such disciplined exercises created his best concise lyrics but also fueled his most wayward and minor productions. Rothenberg’s inclusion of calligraphy may spark a revelation, i.e. in “March 1964” where the extravagant swash serif capital letters enhance the presentation of “What’s your platform? / Ressurexion / Renaissance / Total Paradise.”  Or these extravagances may irritate readers and verify for them Whalen’s indulgent self-absorption.

Whalen dated most poems. But this is no poetic diary, like The Pillow Book, due to his intentions and compositional methods. Whalen’s longer poems arrange main themes and conclusions without benefit of Shonagon’s dramatic characters, domestic settings and societal structures. However, their finales are assiduously imagistic and/or anecdotal, as in his longest poem, Scenes of Life at the Capital, the decayed temple trees.

Another propped up with poles and timbers
Part of it fixed with straw rope
Exploding white blossoms not only from twigs
And branches but from shattered trunk itself,
Old and ruined, all rotted and broken up
These plum trees function gorgeously
A few days every year
In a way nobody else does. 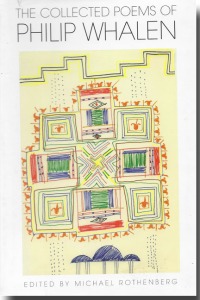 His mid-size lyrics are organized around innovative rhetorical improvisations; usually rhythmic pictorial resolutions end those, too. From “Birthday Poem”:

In a late poem Whalen himself denied his status as “a great POET!” and characterized that notion as “Misunderstanding brought on by overpayment.”  He’d surely be as modest about these 799 pages. Still, in its scope, The Collected Poems of Philip Whalen is uniquely Zen, American and Whitmanesque; it does contain multitudes and masterpieces.

End Notes
For an overview of the Buddhist structures in Whalen’s long poem ‘Sourdough Mountain Lookout” and his poetry in general, see Bruce Holsapple’s “A Dirty Bird in Square Time: Whalen’s Poetry” in Continuous Flame, A Tribute to Philip Whalen (Fish Drum, Inc. Vol. 18/19).
For an analysis of Whalen’s poetic use of a Zen koan see Abbott’s comments in  “Satori Kitty Roshi Style (Or, Enlightenment Practices For Stones)” as a pdf here
For an account of Whalen’s relationship to jazz structures, specifically Thelonious Monk, see Abbott’s essay “Rhythm-A-Ning”  here.

NEW TO THE SOCIETY’S SHELVES