What’s The Hold Up?

The titles say it all, two charmingly illustrated chapbooks by Donald Guravich detailing the salient and exhaustingly social aspects of his and Joanne Kyger’s trips to two of America’s poetry meccas, in limited editions from Blue Press.

This translation of Qu Yuan, besides the usual Red Pine amply notated clarity, serves as a glimpse into an early manifestation of poetry illustrating its shamanic roots. Qu Yuan, contemporaneous with the Greek Golden age, in 93 quatrains treads the line between praise song and incantation, allegory and oblique criticism resonant with Daoist lore, that the heaven will be set right by the power of his testimony (lament) as a shaman. A terrific read, both poem and commentary. And supports Steiner’s contention that “poetry is lament.” 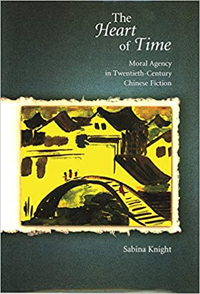 Moral agency is not something that is front and center in the Western imagination or is so buried in levels of deist hierarchy as to be almost invisible, even irrelevant. It is certainly more evident in Chinese literature where personal responsibility provides the ground for moral action found in the Buddhist teaching of “right mind, right act.” Perhaps that’s what makes Chinese literature so different and compelling is its world view.

Sabina Knight’s A Very Short Introduction, from the Oxford series of the same name, is a great primer for those unfamiliar with the traditions and authors of  Chinese Literature, and a terrific refresher for the aficionado and armchair scholar. While Chinese Literature focuses on classical literature, Knight’s The Heart Of Time covers modern Chinese fiction to reveal a contemporary literature reflecting the growth pains of modern China, the tug of war between progressive and reactionary, and brings to the surface a public soul searching that is relevant to understand this ancient culture and tradition in literature transitioning into the secularity of the modern world.

All three of these books were bequests from the Keith Kumasen Abbott Estate and for the most part are so obscure as to be lucky to find space on anyone’s shelves. Yet Kumasen and the Society’s tastes in such exotic appetites overlap and renders them treasures worthy of frequent perusing. 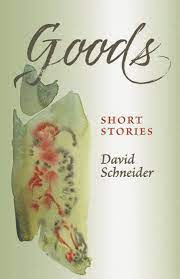 David Schneider is the author of two biographies, Street Zen and Crowded by Beauty, The Zen and Life of Poet Philip Whalen. He was ordained as a Zen priest in 1977, and served as an acharya in Shambhala from 1996-2019. If you thought that being a Zen priest might be nothing but doing zazen and seeking enlightenment, Goods , Schneider’s selection of short stories of an unconventional Zen priest is bound to give you a different, very secular view of monastic life. 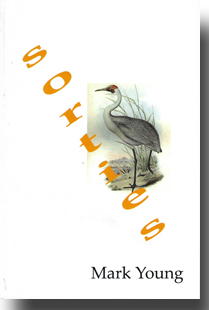 Mark Young is the editor and publisher of the Otoliths enterprise from Australia and its omnibus poetry magazine of the same name. Sorties consists of prose vignettes full of “intelligent, humorous, precise, well-informed observations.” If you haven’t seen a copy of his 2008 Pelican Dreaming (Meritage Press), a selection of poems spanning fifty years, you are missing a treat.

Another gem of philosophical musing and poetry from the interior of a little appreciated literary French Canada and French Canadian soul, in French with some English

A handsome and substantial selection of poems from Elizabeth C. Herron, four time Pushcart Prize nominee in poetry, a fellow International League of Conservation Writers, and a poet in the forefront of ecopoetics from the beginning.

A beautifully produced selection of poems by the man who wrote the book on how to print poetry. The master of letterpress printing brings his talent and his considerable knowhow of this elegant desktop version of meditations on the nature of the world and the nature of self as realized in these concise beautifully realized poems

A particular school of the printing arts has sprung up around Eric Johnson much in the same way that fine letterpress printing and its esthetic took hold in the last quarter of the 20th Century under the guidance and tutelage of printers like Clifford Burke,  Alastair Johnston, Kathy Walkup, and Susan King (to name just a few). As the founder of Iota Press, Eric helped establish North Bay Letterpress Arts, a fine arts printing coop, practicing the methods of handset type and printing on various antique but fully operational hand presses. His recent limited edition handmade books highlight his mastery of the book arts as well as a sense of language and humor peculiar to this who stand at the typecase. 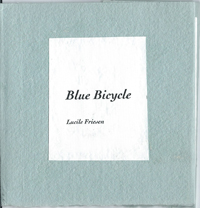 Similar in its style to Johnson’s hand printed handmade books, Lucile Friesen, an alumnus of North Bay Letterpress Arts, who now practices her art in Montreal, offers her meditations on blue bikes and their permutations in the peddling of her witty and insightful poems on a bicycle built for blue. 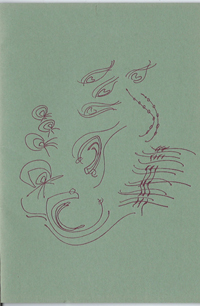 The fine art of letterpress printing is also evident in this selection of John Johnson’s short incisive poems handset by the author and printed at Iota Press on a 193 C&P platen press.

Fell Swoop is dead! Long Live Fell Swoop! His excellency, The Reverend X.J. Dailey, NOLA, has performed the last rites on his long running faux mimeo literary magazines after 164 issue thrown onto the bonfire of the vanities—that’s a lot of paper. Fortunately for the archivists (those that can, do, those that can’t, teach, and those that can’t do either become archivists) a Fell Swoop Bibliography complete with pithy comments and obvious omissions was compiled by the intrepid Dick Martin. Yet fear not, the Rev has reincarnated as another publication destined to be long lived, The Moron Channel, in which the authors all share the Rev’s outrageous wit and humid humor if not actual corporeal presence.

Tinker Greene’s infrequent but much appreciated poetry pamphlets now arrive as dispatches from the Midwest where winters are always a good reason to be from there. Flaming Serpents and all previous such outing are available for the asking from tink@well.com Nice translation of a Reverdy poem from Les ardoises du toit.

When you are raised in a literate family, spend your adult life in the company of artists and poets, from the brick tenements of the lower East Side to the lush gardens of Hawaii and the redwood forests of Northern California, and are as well a seasoned world traveler, it seems only natural to set down your words to share your impressions, explore the sentiments of a communal investment in the life of literature and the art of poetry. That’s what Sandy does in these poems, she presents the disarming and unpretentious cadences of her authentic soul.